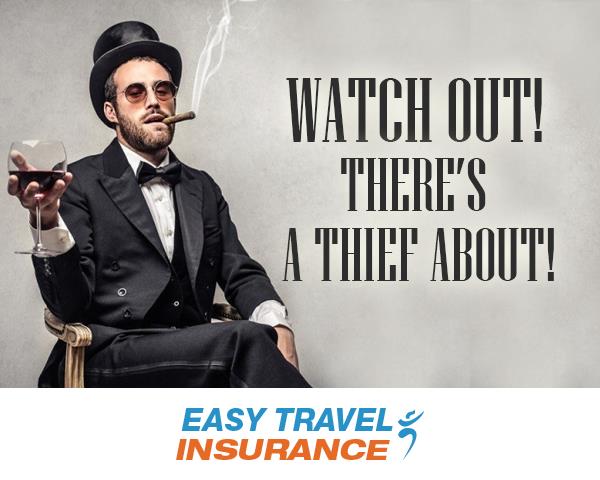 Out there in the big bad world of travel there are a myriad of forces at work all trying to make your day go pear shaped, but there are also flocks of guardian angels looking out for your every step and trying to counter the forces of evil.

Good and bad battling it out is nothing new or unusual, but the smart traveller is aware that there will always be a time that evil (temporarily) may overcome good. This is when your bag goes missing, a plane is delayed or you are taken ill in the Himalayas. When things don't go according to plan you need to be sure to have adequate Travel Insurance.

One of the most common and avoidable pitfalls for travellers is falling foul of tricksters who come in all shapes and sizes the world over, but who have one thing in common...they prey on the unsuspecting and trusting amongst us.

Speaking from experience; I have been duped in Dublin, robbed in Rome, and conned in Cannes…so with a pinch of artistic and geographical license, humour me for a moment and I'll set the scene. Having been born in England but moving to Australia before sampling much of the excitement and culture of the British Isles, I decided that I had missed out on enough of my heritage. So I promised myself I would start to explore a new corner of the United Kingdom and parts of Europe every time I made the pilgrimage back to visit my parents in Devon, in the South West of England.

In the early part of 2002 I was in Dublin – I couldn’t believe that I had never been to Ireland before – I was immediately smitten with the dramatic & beautiful countryside, the quaint & sometimes bizarre customs and of course the unbelievable knack the Irish have to really enjoy themselves.

I had been spending the day doing what all tourists do…visiting breweries amongst other attractions, that don’t really spring to mind after a few local brews, relaxing in the warm glow of an open fire, Guinness firmly in hand, enjoying the hustle and bustle of a great pub called ‘The Gravediggers’ located by the gates of the Glasnevin Cemetery. Soon I found myself deep in conversation with one of the locals, a likeable lad about my age, with a pleasant disposition and an addictive laugh. Apparently we were both speaking the Queen’s English, but I barely got every fifth word and so the entire conversation probably had much more content than I was privy too. We passed a couple of hours together exchanging tales of triumph and fables of failure from our respective chequered histories until it was past closing time and the bell for last orders had chimed for us to leave long ago. We spilled out into the brisk night air and we parted company with an exchange of a vow to meet again the following night.

I still remember hearing his laugh fading in the distance as I stumbled up the path of the B&B, and as I leaned on the old black door to push my way in, I realised to my horror that the 18th birthday gift of a superb watch was conspicuous by its absence....surely it hadn't been taken from me? I don't recall any contact with anyone....except...arrgghhh! Surely not, there was only the warm pat on the back and the friendly handshake of introduction. Could that have been enough? I investigated the next day while waiting in the boozer for my new found chum to return, but it had not been handed in and as the night drew to a close, the slow dawning of being duped spread across me. Lesson learned? Absolutely!

A year or so later saw me taking a coach tour from Rome to Milan via all the iconic cities, basilicas and tourist traps the Italians have to offer. Off to a flying start I spent 2 days and nights in Rome absorbing the atmosphere and wonder of markets, café bars, restaurants, shops, scooters and all the trappings of modern Italian life, uniquely set against a historic back drop of once majestic empires and fallen heroes, before being collected promptly by my own chariot and whisked away through the ancient, sandal eroded, cobbled city streets. We were headed for Pescara.

Only 2 minutes out of the city centre pulling up in a bustling transit centre we are given leave to stock up on supplies for the journey – in these situations you are presented with a fork in the road regarding the safety of your possessions. Given that it is a reputable tour operator, leaving your valuables on the bus seems like a totally viable option, but I am a naturally suspicious traveller, always with my guard up and determined not to let someone spoil my well-earned break by legging it with my luggage. In this instance, as I was new onto the bus, I opted to take my wallet, travellers’ cheques, camera, and passport with me, securely buttoned, zipped and strapped into various pockets and secret compartments in my attire. Safe in the knowledge that I would have to actually be killed, or worse, for someone to get at my valuables I ducked inside and triumphantly emerged some 5 minutes later with my stash of crisps, snacks and energy drinks - I refuse to sleep in case I miss ANYTHING when I travel!

Standing outside the front of the store, I found myself checking my change. It is necessary to employ algebra and all manner of other mathematical tools to calculate the mind boggling number of zeros with the Lira, and as I was struggling to make sense of the numbers it all suddenly became really simple. I was swiftly relieved of the fistful of Liras by 2 kids on skateboards….Did that just happen I asked myself as they disappeared from view?

I was snapped out of a frozen look of disbelief by the call to board the tour bus where I silently took my seat, too embarrassed to share the details of this daring robbery with the other passengers, guide or driver until we finally disembarked in Milan some 10 days later.

My trip to the South of France to warm my bones by the Mediterranean was a well-deserved break after a tough year at work. This was my reward after selling my little takeaway store that had been so much than a 24/7 operation. Hell, it felt like I worked 25 hours a day, 8 days a week for a whole year, and so I was terribly pleased and enormously relaxed after a successful sale of the business, the successful executive laying back on my inflatable li-lo looking in towards the beach where there was a mixture of young and old all enjoying the beach life.

With one eye on my towel that was the first line of defence in the protection of my wallet and mobile phone, I decided to paddle ashore and head to the ice cream seller by the car parks. After hurriedly drying the salty water and brushing the sand away, I satisfied myself everything was all present and correct and I jogged up to the street. I treated myself to the biggest delight on the menu and as I turned, I almost knocked into the lady behind me. She smiled and complimented me on my ice cream and asked if I had change for a large denomination note.

Now here’s where I lose track of events! I know we swapped notes repeatedly for a good few minutes while trying to settle on the desired outcome of smaller notes for her, but in the ensuing calculations, swapping and recounts, somehow I ended up with half the contents of my wallet being in her purse and sadly, I was so confused that I honestly didn’t realise what had occurred and was completely oblivious to the whole Cannes Con until I sat and had recount after recount after she had long gone!